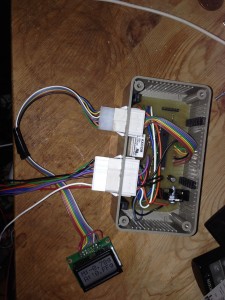 It’s been a busy few months but things are really starting to fall into place now with the official agreement from work for me to take the time off etc… The shipping date is more or less finalised so I now have a deadline to work to and that in itself has certainly focussed our attention on what still needs to be done between now and then !

Near the top of the list is the fuel and battery monitor as that will play a key part in the trip, giving a more accurate view of the current fuel status across the two tanks than we could hope to get from the standard gauge. The wiring for the unit is now completed in the vehicle, along with a bypass plug that allows the unit to be removed and the normal fuel gauge to work as normal. This should give some redundancy should the unit fail for some reason.

The monitor is on the second design and is now full functioning with just a few software tweaks needed and some calibration of the fuel levels. The auxilliary tank has been calibrated now and I just need to put the values into the software, the main tank is next to calibrate. I’ve calibrated the tank/sender in 5 litre steps so we should have a reasonable idea of the remaining fuel at any time if the sender unit stays consistent. I still need to decide exactly where the lcd display will be mounted, a 3D printer would be very useful right now to make a custom pod for it !

While calibrating the auxiliary tank we managed to get 57 litres into it before it started to overflow, 55 is probably a more sensible amount to put in but it shows how much you can get in, using a 5 litre jug.