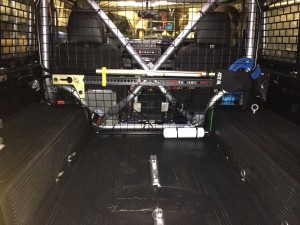 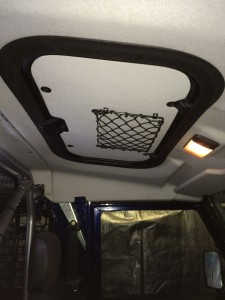 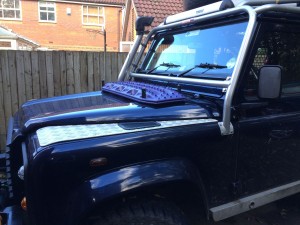 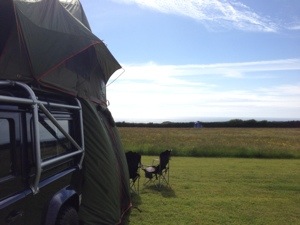 Another “trial run” is under way, this time a slightly longer trip with a different camp site every night and varied roads and distances between them.
The first night was a pleasant enough stay in the Cotswolds with reasonable weather albeit with a smattering of rain overnight.
The second night was more of a “trial” than anticipated. During the late evening the winds got up and we paid the penalty for being in a high tent on what was essentially an open hillside overlooking the sea. The tent itself weathered the onslaught well without any problems at all really, the occupants on the other hand got very little sleep. The combination of noise from the wind and the Land Rover seeming to want to roll over as each new, more powerful gust hit it, made it nearly impossible to sleep. It didn’t help that we’d pitched it side on to the most powerful gusts of wind.
In the end we called it a day not long after dawn, deciding trying to sleep was a pointless exercise and we’d be better off getting up and packing the tent away and moving on.
More gales are forecast for the rest of the week so we’re looking for more sheltered sites and taking care to try and park up with the Land Rover facing into the wind. 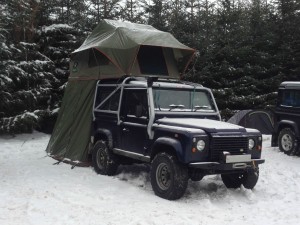 That has to be the coldest camping trip I’ve ever been on. The snow drifts around Duns were deep enough to stop pretty much any vehicle and some of the roads were closed throughout the weekend, about 800 yards up the road from the camping field in fact the road was closed due to drifts but the local snow ploughs kept the road past the camping field to Abbey St Bathans open.

The camping field itself had around 10-12 inches of snow but much of it had been compacted by vehicles so we were camping on top of the compacted snow and by Friday night there wasn’t much in the way of fresh snow, just the gale force winds and freezing temperatures causing what snow there was to drift.

The night section had to be abandoned due to 15 foot snow drifts on the course that had been laid out, not even the quads could get around the course. Anyway, apart form the constant zero and sub zero temperatures and wind chill down to -10 degrees C we and the camping gear coped pretty well. We slept well on both nights and were warm enough – we were both using 2 season sleeping bags with the duvet over the top of us and a hot water bottle each inside the sleeping bags.

The combination of compacted snow and a plastic ground sheet made life both interesting and precarious in the lower tent. Every footstep had to be made carefully in case the ground sheet slipped from under you on the ice below. We’re hoping that’s not something we’ll need to worry about in Australia !

Fortunately we took the Volcano kettle with us and plenty of firewood as the gas stove was a waste of time due to the cold temperatures. It did work, just took ages. The volcano was by far the quickest method to boil up some water and has probably reestablished itself as something we may take with us if space allows. As well as supplying us with hot drinks and pot noodles we also used it to fill the hot water bottles 🙂

We re-fitted the roof tent today after it’s winter break. It’s actually barely above freezing during the day at the moment but we’ll be camping in it at the Muddy Truckers Trophy so the sooner it’s back on, the better. There’s snow forecast in the run up to the event, fingers crossed that changes !

As with getting the tent off the roof in the first place I decided to use the strap and winch ramp technique. With a long strap from the roll cage to the end of the bumper on my challenge motor and a second strap from the cage to the winch (allowing that strap length to be “adjusted”) we placed the roof tent on the trusty Black and Decker work bench then drove the challenge motor backwards. As the straps tightened the roof tent was lifted off the work bench and then it’s just a case of pushing the tent up the ramp… carefully ! 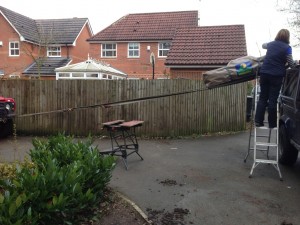 For once refitting was the reverse of removal and all went smoothly. We mounted the tent a lot further forward this time to see how it would work, time will tell.

With the roof tent on I fitted and wired up a couple of LED rear work lights as we’re almost certain to be needing them in Scotland and no doubt will end up setting up in the dark on at least one night. 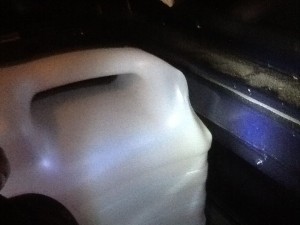 We’ve been looking at a number of ways of carrying enough water in the vehicle. It would be nice, in some ways, to have some sort of fancy built in water tank with a pump and a tap at the rear of the vehicle etc… In the end though we decided to try and find some decent 10 litre containers with taps so we can have some flexibility. We found some ideal looking water containers at the right price but when they arrived they wouldn’t quite fit on the wheel arch where we needed them to go due to the shape of the rear tub. A quick consultation with Brendan suggested I might be able to modify them by heating them in boiling water. 30 minutes later, with the aid of a pan full of boiling water, the bottles were reshaped to fit the shape of the tub. I was surprised just how soft and pliable the plastic got at comparatively low temperatures.

We can now fit three of these along the wheel arch next to the fridge.

I replaced the ARB locking diffs in my challenge motor with Ashcroft lockers with the intention that the ARBs will go into the 90. Sent the ARBs off to Crown Diffs to have them reconditioned and tested. 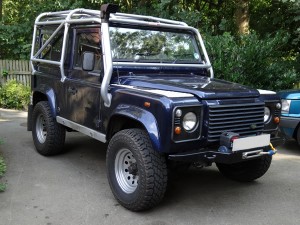 Took the roof tent off today, it’ll live in the dining room until it’s next needed. We’d been discussing how we were going to get it down off the roof safely for a while and in the end we went for a combination of winch and straps to make a “ramp” for it to slide down. It worked really well and the tent was soon safely delivered to the ground without too much effort.

The plastic air intake cover on the off side wing went MIA somewhere on it’s daily commute into York and back. As good a reason as any to fit the P&P snorkel that we’ve had sat in the dining room since the cage was fitted. Pleased with the look of it and should be a big enough diameter for the performance to be unaffected. The snorkel came with a vortex style ARB top that we’ll save for Australia, The Safari snorkel top is a straight fit, arguments about ram air effect versus collecting water/grit ignored in favour of looks, it’s facing forward at the moment ! 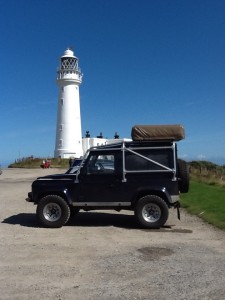 Our final destination for our mini trip was Flamborough Head – a quick visit to the lighthouse offered a quick photo opportunity. Then off to the campsite to set up, followed by a walk down the coast to the pub for a bite to eat.

All in all our mini trip was quite successful. We experienced a range of weather conditions and  found a few problems and areas which we need to modify, as well as a lot of things that worked well. The 90 performed well and the extra load was no problem. 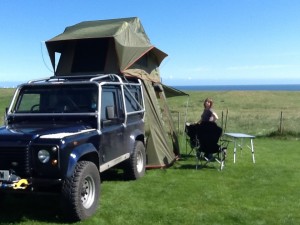 The suspension all worked well even on some of the very minor roads with pot holes, hump back bridges and tight bends that gave me a chance to test it’s stability and handling. Our second stop of our mini trip at Newton upon Rawcliff. The advantage of this particular site is that it’s at the back of a pub 🙂

The first job when we arrived was to figure out what had gone wrong with the fly sheet. As it turned out it was a simple problem – the buckles on the straps that hold the sheet on were all threaded the wrong way, allowing the straps to come loose.

10 minutes spent sorting the buckles out and we were good to go again. 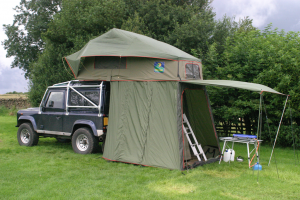 After dropping the tin tent back home we set off in the 90, this time with an itinerary of overnight stops at camp sites scattered across Yorkshire. This was to be a practice run allowing us to see how the 90 and the tent performed when touring and to see what worked and what didn’t with a few stops along the way. 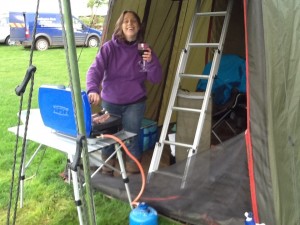 The weather was “variable” with strong winds and rain some days and clear blue skies on others. In a lot of ways it was the perfect shakedown.

The first night, which was also the worst weather of the trip was at Bungdale Head, this revealed a bit of a problem with the flysheet, as we found out in the morning after a night of strong winds and rain. As we were closing the tent up in the wind the flysheet tried to escape, we managed to get it put away but there was obviously something not right with it.