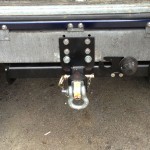 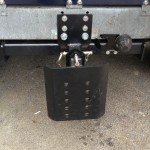 Another “major” piece of kit has been acquired now and ticked off the list. We’ve decided to go with a satellite phone for emergency use rather than a radio set although we’ll have the VHF set for “local” communications.

To save some of the budget we went for a second hand one so have been keeping an eye on eBay for the right combination of price and condition. The one we eventually bought came complete with a waterproof Peli case and 60 units prepaid so we can experiment with it and get familiar with it’s features without worrying about the cost.

We went for an Inmarsat Isatphone Pro which seems to be well regarded and certainly initial impressions suggest it’s a well put together piece of kit. It has a whole load of features and options but I guess the most important for our use apart from voice communications is the ability to quickly email or SMS our exact location. 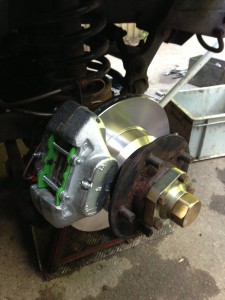 This weekend was a chance to catch up on some maintenance and servicing jobs. My competition Land Rover ate it’s front prop shaft while pulling the caravan back from the bank holiday trials weekend so Saturday was devoted to some well overdue TLC for that given the 90 has been taking most of my spare time up.

With the competition motor back up to spec I set about servicing the brakes on the 90. The front brakes are the vented type from a Range Rover and the callipers are the best part of 20 years old. I rebuilt them nearly 10 years ago with new pistons and seals but they are probably one of the oldest components of the vehicle so well overdue for replacement.

Today was spent replacing the two front callipers along with one of the brake lines that looked a bit borderline. Along with the callipers I changed the rotors/disks too so with a new set of brake pads it should give a bit more bite under braking. I’ll swap the rear disks out too at some point as there’s no point in starting the trip with components that aren’t 100%. 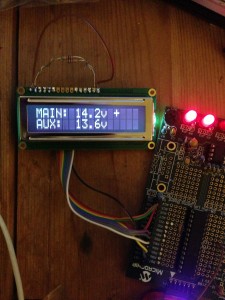 The dual battery system has been missing a couple of things since I first installed it and I’ve spent a few evenings this week playing with a PIC chip and an LCD display. The aim is to have some way of checking the charge level of both batteries and to control the automatic charging of the secondary battery when the main battery is at a reasonable voltage. It will always have the manual overrides of either permanently connecting the aux battery (to jump start the main) or having it disconnected if I want to put all the charge into the main.

As the PIC chip I’ve chosen has plenty of spare capacity I also added provision for it to display the fuel level in each fuel tank too, alternating every 10 seconds between the fuel levels and the battery levels/voltage.

I’m currently using a 16×2 character display but the finished version will be 2×8 characters, allowing it to take up less dashboard space. The programming is just about done apart from calibrating the fuel levels against the two sender units, just need to build the design into something a bit smaller now !

The chip I’m using has another 4 spare analogue inputs so I might add some additional warning monitoring into it yet. Maybe gearbox temperature, fuel pressure perhaps, turbo boost pressure, I’m fitting a dedicated monitoring system so I’ll see what that’s missing and maybe add them into this chip/display. It’s always better to know when something’s starting to go wrong rather than a complete failure being the first sign of trouble.