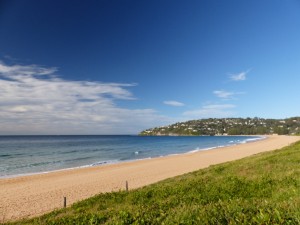 Our first destination today was a visit to Palm Beach, somewhere we’ve visited every time we’ve come to Australia since stumbling across it by accident the first time we came.
It’s a beautiful spot with a beach either side of the thin peninsula. It’s probably most widely known as the location of Summer Bay in the Home and Away TV soap opera. Every time we’ve been it seems that it’s been developed a bit more and the free parking seems to have gone now too. I guess that’s a sign of it’s popularity. 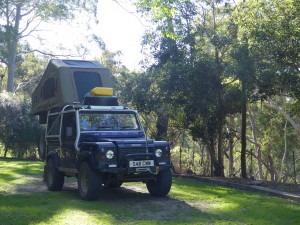 Our final camp site of the adventure.

In one of those strange “small world” coincidences, we got talking to a couple who asked us about the Land Rover when we returned to it. We’ve had many such conversations throughout the trip so that wasn’t unusual. As we related our route around Australia he said his brother had crossed the Simpson Desert recently too. Anyway, to cut a long story short, it turns out he’s Mal’s brother ! 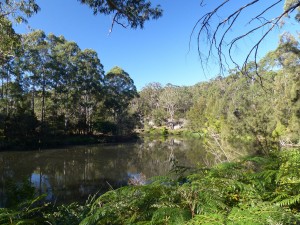 A view of the river at Lane Cove

From Palm Beach we headed south again into North Narrabeen to say our fairwells to Mal before heading across the city to Lane Cove National Park where we’ll spend the last two nights of our trip.
It’s a strange mix of feelings at the moment as we don’t want to leave Australia and end the trip but on the other hand we want to go home. As we set up camp for the last time, that too becomes another nail in the coffin for this particular trip. Another in a long list of things that have been part of our life for the last 4 months that we won’t be doing again. 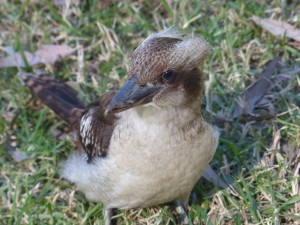 Kookaburras are always a delight to watch and sometimes to hear… Although they can get a bit loud !

We went for a walk down to the river from the camp site along the bush walking trail and that helped a bit. The antics of a Kookaburra kept us amused for a while and that too served as a reminder of something else we’ll miss. It has been an amazing adventure and the reality of it coming to an end and returning to normality is a bit depressing right now.
Tomorrow we’ll probably spend a good part of the day emptying and then repacking the Land Rover. We’ll need to decide what we’re taking home in our bags and what is returning in the container. We’ll probably have time to go for another walk though.